How to Detect SYN Flood Attacks with Capsa

Denial-of-service attack (DoS attack) is a malicious attack to make a machine or network resource unavailable to users, usually by temporarily or indefinitely disrupting services of a host connected to the Internet. (US-CERT 2013)

Today, DoS attack is a common cyber-attack on the network. According to the statistics, every three seconds, there is a DoS attack happened on the Internet. The low cost of launching a DoS attack is one of the major causes of frequent DoS attacks.

Some of the most commonly used DoS attack types include:
Ping of Death, Teardrop, WinNuk, UDP flood, TCP SYN flood, IP Spoofing, Land Attack, Smurf, ICMP flood, etc.
In this article, we will show you how to detect SYN flood attacks using a network analyzer such as Colasoft Capsa.
In order to analyze DoS attacks, we need to follow three steps below.

Most of hosts which are under DoS attack will show high CPU and memory usage or network bandwidth is occupied by garbage traffic.

With TCP/UDP session and chart function, we are able to locate DOS attacks more accurately and quickly.

Next, I will give you an example to show you the detailed steps.
The Dashboard view dynamically displays statistics with various charts. In Dashboard view, the first graph definitely points out our network has the anomaly traffic. Because the utilization of our network almost reached to 100％. Then, go to Summary view to check summary data statistics. 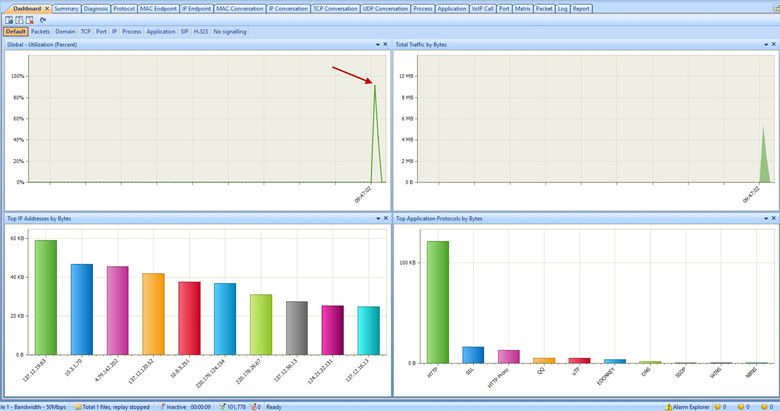 Under the Summary view, summary statistics of current capture are displayed. According to these statistics, we can find out there are too many small size packets in the network. In addition, the count of TCP conversations and TCP SYN sent packets are abnormal. 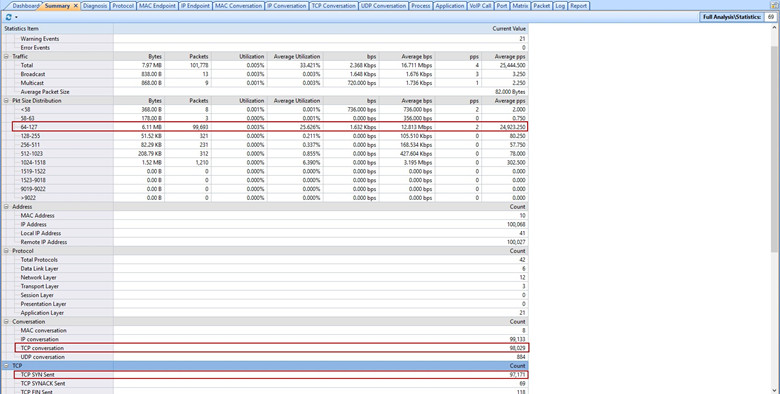 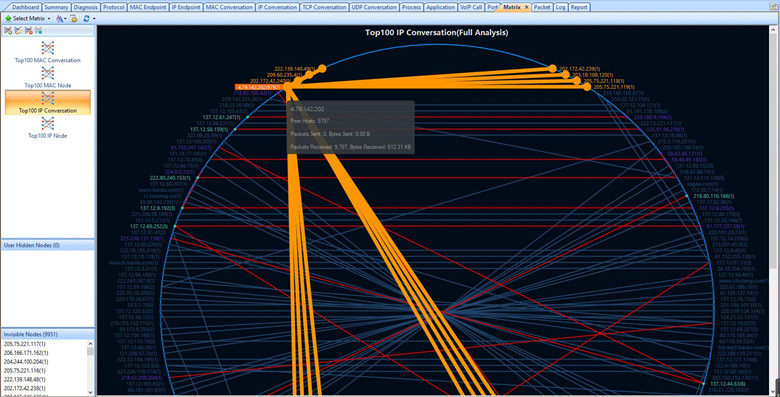 Combine with the above information, we can identify that there are SYN Flood Attacks happened in our network. And IP address of the targeted server is “4.79.142.202”. Because of the attack, it caused the abnormal traffic and consumed our network resources.

Thanks for reading this articls. If you want to get more information about Capsa. Please click here to see more about it

How to Detect Routing Loops and Physical Loops

IT departments are often faced dealing with network loops and broadcast storms that are caused by user error, faulty network devices...

During ARP attacks, users usually experience slow communication on the network and especially when communicating with the host...

In order to monitor http traffic, we will need a packet sniffer (or a protocol analyzer) software. Here is a detail process how we can monitor...

As a network analyzer (aka. packet sniffer & protocol analyzer), Capsa makes it easy to monitor and analyze network traffic in its intuitive...

How to use VoIP Analysis

What is HTTP Sniffer

HTTP Sniffer is a HTTP packet sniffer, protocol analyzer and file reassembly software based on windows platform. Unlike most other sniffers...