How to Solve the Problem of Slow Access to Virtualized Services

With the rapid development of virtualization, more and more enterprises deploy application systems in virtualization environments, and traditional operation and maintenance platform can no longer to cope with the problems encountered in virtualization.

A telecom operator’s business management system was migrated to the Citrix Virtualization, but users reported that some business applications responded very slowly after the migration. The user's internal information system topology is as follows. 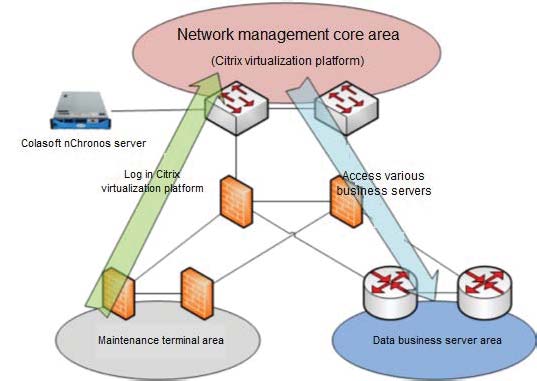 The three servers listed in the table below which make users feel the application responds slowly.

A Colasoft nChronos server was deployed in the core switch of the core business area, mirroring the two-way traffic of the uplink port of the switch. nChronos system 7x24 captured traffic in the core business area, and the data is analyzed for the period of slow business and slow access. By capturing transaction process of Citrix with management terminal and business server, nChronos can help users to evaluate performance parameters such as network transmission delays and application system response delays in slow-access application transactions. With the analysis results, users can locate the root cause of slow business accessing.

First, the engineer evaluate the link traffic by nChronos at the external of the core business area, the purpose of which is to see if there is congestion on the upstream link of the switch.

According to the figure above, it was shown that within 4 hours, the outbound peak traffic was 37.51 Mbps, which was far less than the total bandwidth. Therefore, the slow application access was not caused by excessive bandwidth utilization of outbound bandwidth.

The application management platform takes about 1 minute from opening the client program to displaying the interface, and the user experience is very poor.

The figure below is the traffic trend analysis interface for Citrix X.X.X.112. It took about 50 seconds from open Citrix client to the initial interface displaying of application management platform. X.X.3.112 mainly communicated with X.X.3.125 (test terminal), X.X.3.86 (domain controller) and X.X.8.18 (business server). The other IPs were confirmed to be irrelevant to the test after analysis. 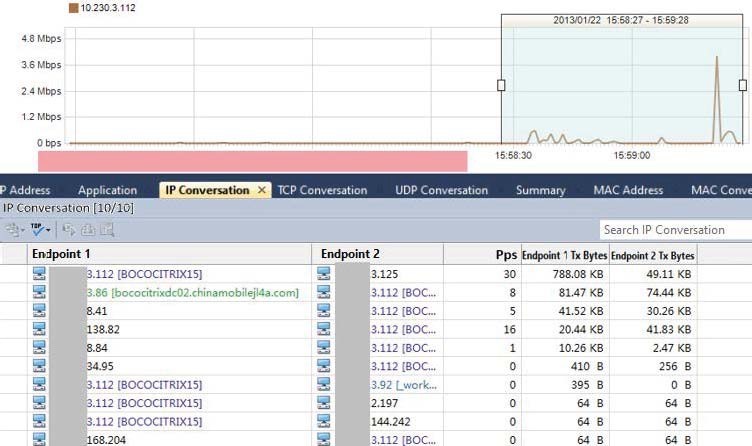 The traffic is less than 1MB, and the peak was about 4Mbps. There was almost no traffic from 15:58:45 to 15:59:22, which was abnormal. So, we needed to analyze the conversation during that period.

The engineer downloaded the packets from X.X.3.112, and then used TCP Conversation Reorganization of Expert Analyzer to analyze the TCP conversation flow. 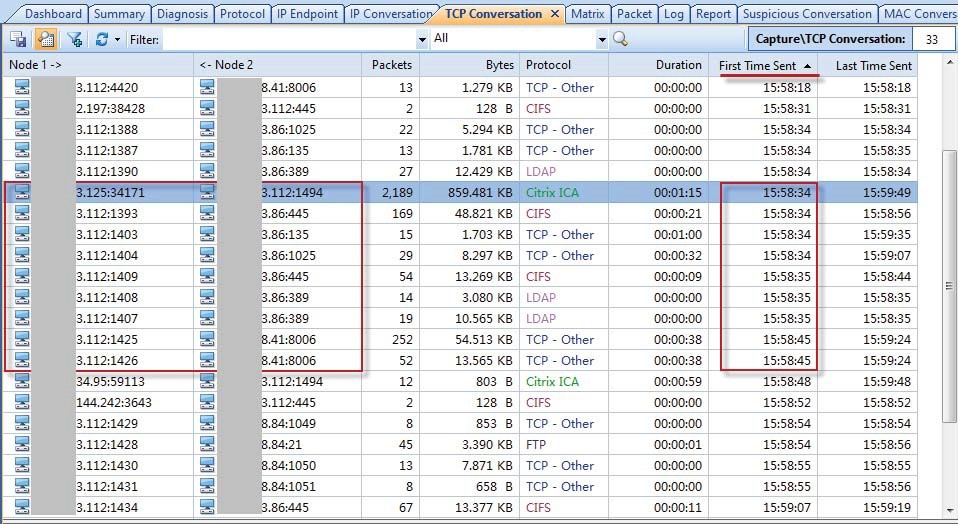 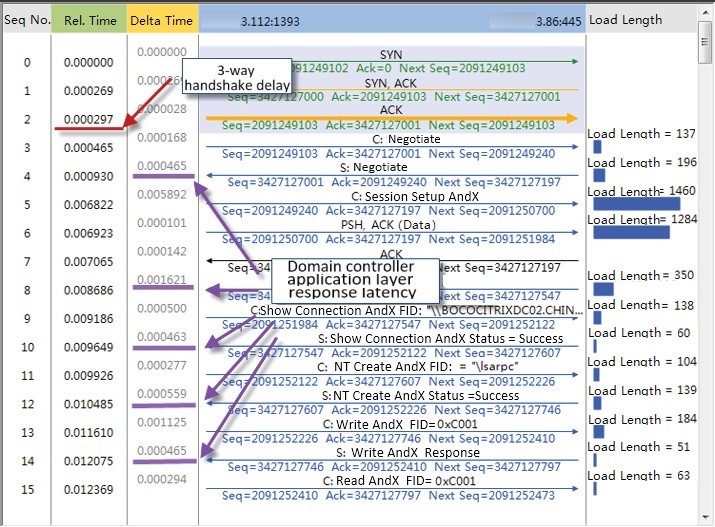 As we know, the three-way handshake delay can be considered as the client-to-server network response time (RTT). In the figure above, the three-way handshake delay between X.X.3.112 and X.X.3.86:445 was 2.97ms, so the network delay was very short. What’s more, the domain controller application layer response delay was about 1ms, which also was very short.

After the conversation started, the transaction will be completed in about 996ms, and then there will be about 20s of idle time. Show as below. 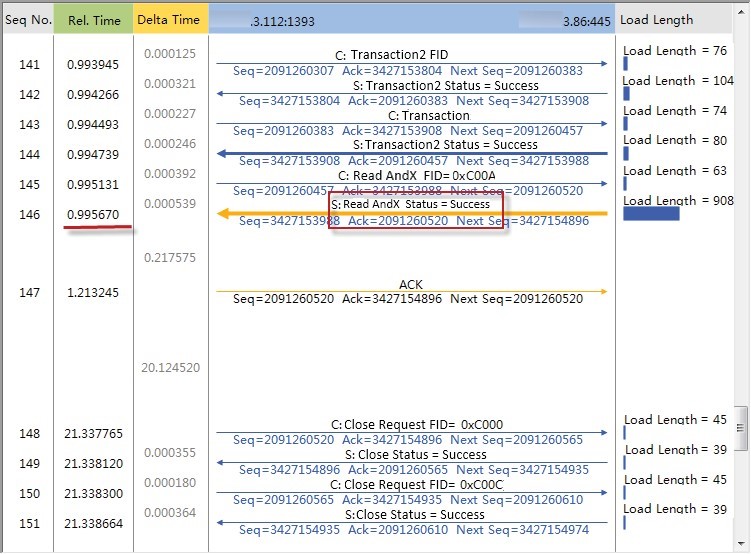 It can be judged that although the conversation lasted more than 20 seconds, the data interaction necessary for the login process was completed within 1 second.

By analyzing the other conversations triggered by domain logins, we found that all these conversations completed effective data interactions within 1 second. It can be determined that the domain authentication process started at 15:58:34, and it was completed at 15:58:36. Therefore, the authentication process of Citrix client login did not directly cause slow response.

The figure below shows the two TCP conversations between the Citrix and application server X.X.8.18. The three-way handshake delay and response time of application layer are also very short. 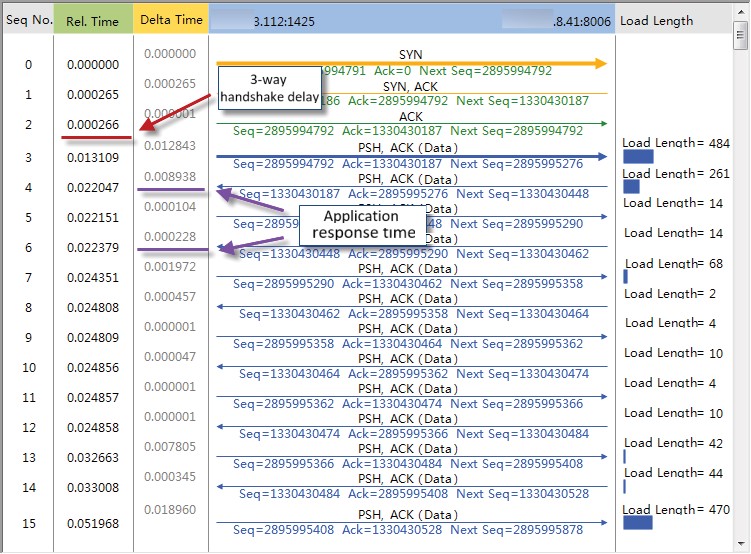 However, according to the overall delay statistics of the conversation, we can see that the main time occupancy comes from the client idle time. Show as below. 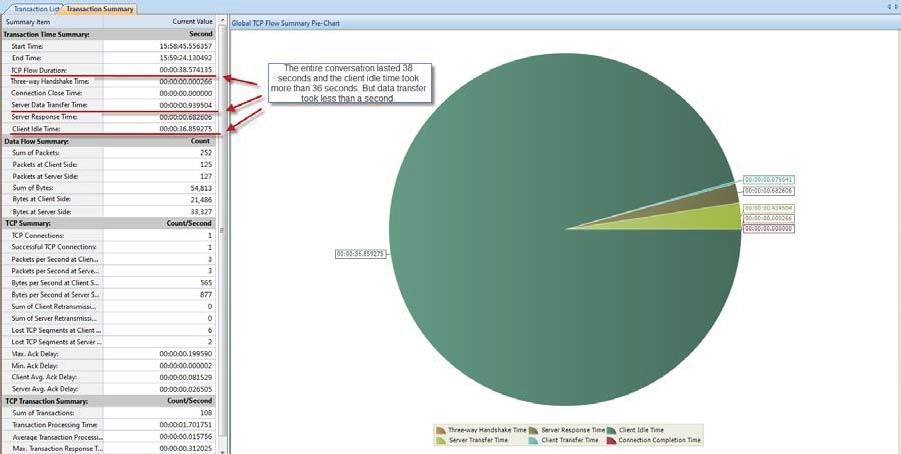 It can be seen that there was an obvious client idle for both conversations in the transaction sequence diagram. Show as below. 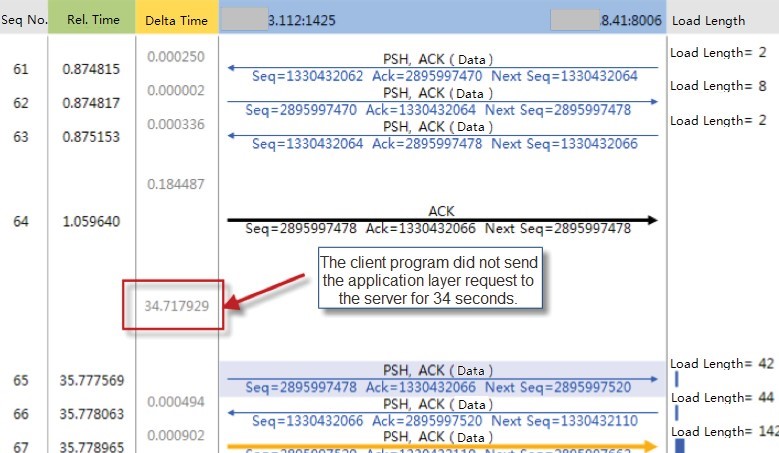 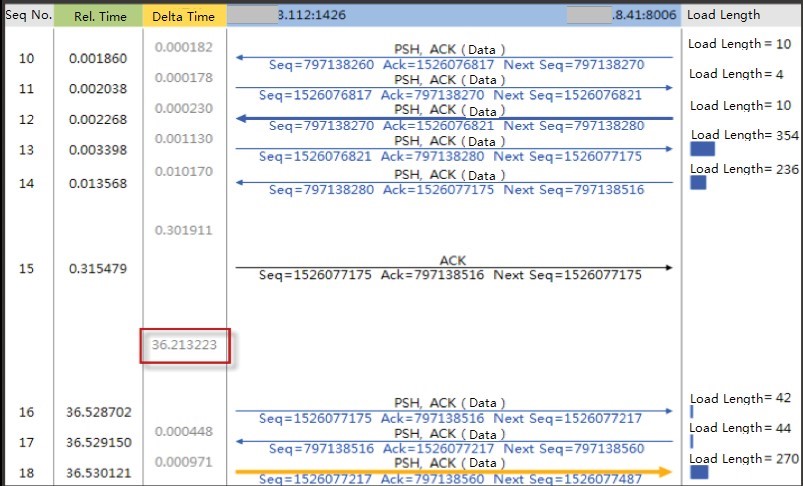 It was inferred that the client idle caused slow response. It was likely that the client processing is too slow, and no application layer request to be sent for a long time.

Then we randomly selected some TCP conversations between X.X.3.112 and X.X.8.18, and found the same client idle. Show as below. 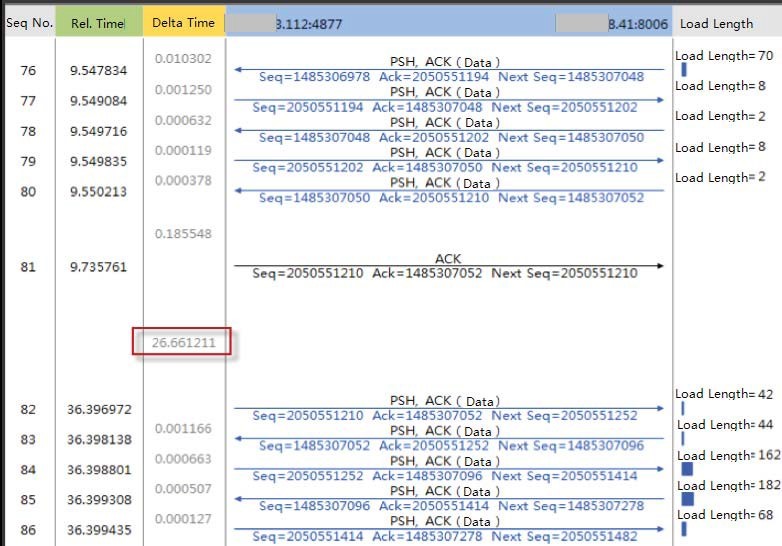 Therefore, it was inferred that the client program processed too slowly before sending those two requests. And the system developers were advised to get in-depth analysis of program processing.

The figure below shows the conversation between the user terminal and the Citrix X.X.3.112. It can be seen that the three-way handshake and application layer response time are very fast. 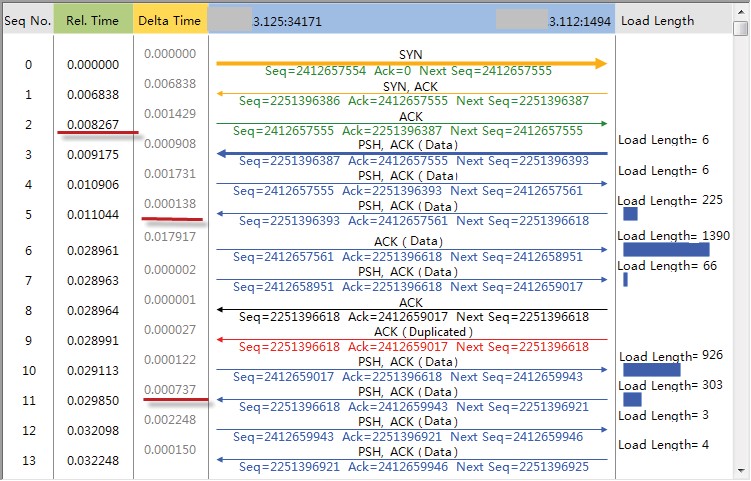 What’s more, this time coincided with the time when X.X.3.112 sent a new application layer request to X.X.8.18 after a long wait (lag 3ms), which showed that Citrix can quickly send image data to user terminals after the application processed.

It can be judged that the Citrix had not caused obvious delay in user access.

The slow application response has nothing to do with network infrastructure, Citrix and Server X.X.8.41. The main reason for the slow response was the slow processing of the application management client on X.X.3.112.

There are two possibilities,

When an application access failure occurs after the application is migrated to virtualization, and due to the good running state of virtual host and the network, the compatibility of the virtualization will be considered in most cases, so it is difficult to locate the failure in a short time.

With Colasoft nChronos, we can comprehensively monitor network traffic, and use traffic analysis technology to compare and analyze multi-segments traffic, quickly locate the fault and improve the efficiency of fault recovery.